Outside the film Borat, Kazakhstan is little-known in much of the world despite being the 9th largest country by area and largest landlocked country. Indeed, among the 5 ex-Soviet ‘stans it may be the least distinctive in the minds of travelers. Uzbekistan? Silk Road. Kyrgyzstan? Lush valleys. Tajikistan? Rugged mountains. Turkmenistan? Wacky authoritarian megalomania. But Kazakhstan? Hmmm, well a little bit of all of those.

With Kazakhstan going visa-free for for the US & 9 other countries starting July 15, 2014 through July 14, 2015 (trial period), the country deserves a fresh look.

With its neighbors providing a buffer between regional hotspots, and fewer ethnic/religious tensions, Kazakhstan is relatively calm though not without some incidents, most targeted at government officials, as the US State Department notes. There is a state security apparatus keeping an eye on things. In my 2009 visit I found it the most carefree of the ex-Soviet ‘stans and felt comfortable at all times.

Isolated position and massive size make Kazakhstan a difficult fit on many Central Asian itineraries. Seeing the Ship Cemetery at the shrunken Aral Sea sounds appealing yet it is 800+ miles by road or train from Astana and Almaty with no nearby commercial airport.

Here are two reasonably accessible trip ideas that can be combined or done separate.

President Nursultan Nazarbayev is the only leader Kazakhstan has known since independence and it will take a box with handles for that to change. In 1997 he moved the capital from Almaty, leafy playground of the elite, to the central of the country at Astana. When cash meets ego and focuses on monumental architecture the results can be bizarre. Not as bizarre, I hear, as Turkemenistan’s Ashgabat, but a whole lot easier to visit visa-wise. I have not personally visited. Astana’s airport is served by national carrier Air Astana as of the major alliances, Star Alliance has the best options with Austrian, Lufthansa, and Turkish. Of the big Gulf carriers, only Etihad flies to Astana.

Almaty and overland to Kyrgyzstan

No longer the capital, Almaty has the quiet, leafy feel of a European city. Soviet influence is limited to the big hats of police and occasional monuments. Sample horse meat in style. There is a significant Korean population that dates to tumult of the 20th-century people. 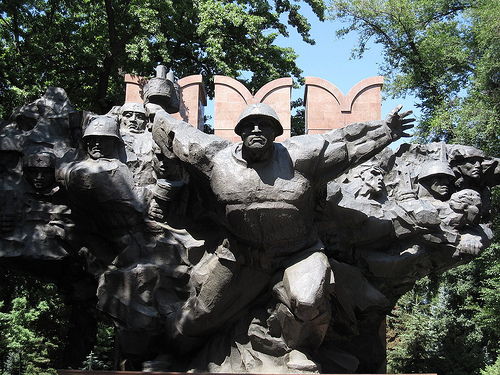 A Soviet WWII memorial in Almaty

There are day trips to lush forests and lakes such as Altyn Emel National Park to the north and Soviet winter sports complex Medeu in the south. I like Almaty most as a taste of Kazakhstan and starting point for a great, easy road trip down through Kyrgystan’s Karakol, Issyk Kul Lake and on to Bishkek. Incredible scenery and a mix of welcoming ethnic groups.

Kyrgyzstan has been visa-free for US citizens since July 2012. The lush north is stable, while the far southwest in the Fergana Valley and areas sandwiched between Uzbekistan and Tajikistan, seemingly a world away, have had more safety issues. This route is best accomplished with hiring private transport. Public transport is limited throughout the region. The Kazakh road to Kyrgyzstan Tea with a Kyrgyz family camped by the road Across Kyrgyzstan to Bishkek

Readers, what are your Kazakhstan suggestions?

I booked for 30k the following back in March…

I’m supposed to fly this route in two weeks. This is no longer possible and OW options to ALA from Asia is non-existent, except with the US-TK partnership.

Unfortunately, I will have to cancel… since I”ll be flying from FRA on LH F instead. 60k UA miles one-way.

Another nice thing is travel with US airways. It is hard to get to. China and the Stan countries are in the same zone. So for 25k Econ or 30k business you can get there. I went in April and went china to Cairo to beruit to Istanbul to kygestan (at the time only Stan country visa free) then to Istanbul ten to china. All in business for 30k. So you can have an adventure for a few points. We drove into three countries and hit 8 countries in 7 days and slept on planes and had 3-1/2 nights in… Read more »

@Travis – awesome use of US Airways miles! I wish I had known that when I was living in China. I am booked for Egypt and Lebanon in the fall, looking forward to it.