I had a 7-hour layover in Brisbane. The Lord Howe Island Saturday flight arrives a 20 minutes after the Norfolk Island flight so I had to route that night through Auckland.

The international terminal is a free shuttle bus ride from the domestic terminal. I had previously visited Brisbane and had a lot to catch up on good internet, so did not take the new train into the city.

I was without internet in Lord Howe Island so went to the Air New Zealand check-in counter which was staffed from the prior flight that had just closed. I heard the same story as with Qantas and Virgin Australia: the counter is not able to check-in until 3 hours (Virgin Australia and Air New Zealand) or 6 hours (Qantas) prior to departure. With Qantas in Sydney the workaround was app check-in, after which the transit agent was able to give me the printed boarding pass needed for inter-terminal transit. That should work with Virgin Australia domestic, though not international which does not have online check-in.

I was about to try that for Air New Zealand when the agents found a way to check me in and I was on my way. I was on the lookout for the security line patrol lady with spiky hair that in 2012 sent me back to Virgin Australia to check my backpack for being too heavy, even though Virgin Australia approved the size. Funny the minor incidents we remember!

No hassle and a breeze through SmartGate. The chatty staff filled me in on the goings on at Brisbane. Down the hall the new Singapore Airlines lounge is due to open end of April or so. New Singapore lounge? Where’s the old one?

They directed me down to the old, small Singapore lounge, hidden down an unsigned hall in the duty free labyrinth.

I got in with my Star Alliance Gold status. One of those times I had to gently remind the reception agent of Star Alliance rules. She wanted me to stick with Air New Zealand. I wanted better food than wraps. With a friendly chat I was in.

The current lounge only operates around Singapore departure times. With the new space they may expand since many Singapore passengers on long layovers end up at Air New Zealand. Note that Eva Airlines contracts with Qantas for its passengers.

The lunch food selection was superior to the SilverKris Lounge in Singapore. Cold items such as seared tuna. Hot dishes of Singapore-Chinese-Indian staples. Tim Tams in the snack basket. What more could you want? 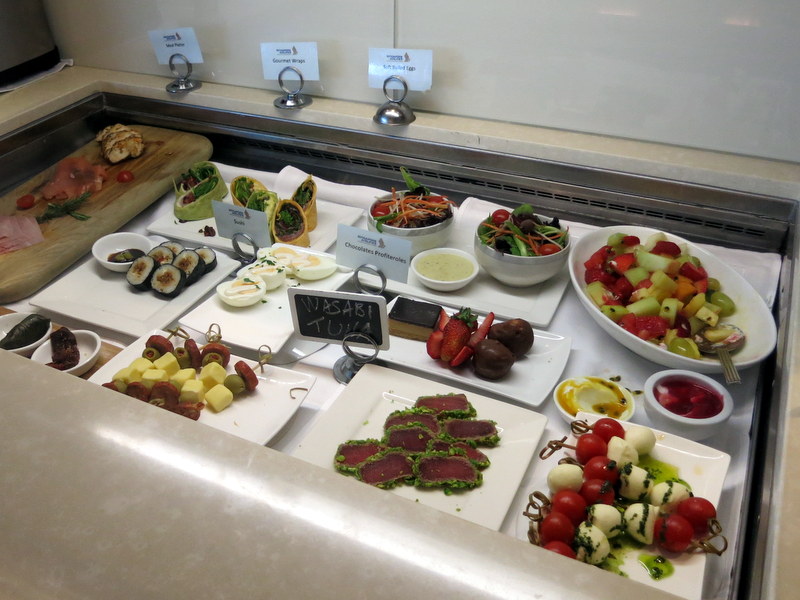 Directly across from the Air New Zealand lounge a new 3rd-party lounge is soon to open. Australia has few if any 3rd-partry lounges. I thought I read a piece on View from the Wing about regulatory reasons. Brisbane’s International Terminal does not have a Virgin Australia lounge, and other than the three above mentioned (Qantas, Air New Zealand, Singapore Airlines), the only other lounge is Emirates. I am curious if this will become Priority Pass’ first Australia lounge or only serve airline premium cabin passengers. With Qantas in OneWorld and Virgin Australia sort-of SkyTeam (at least in Delta’s coalition of the willing), Star Alliance has to cobble its regional presence out of Air New Zealand and scattered flights from its other member airlines. I wonder if this presages of bigger Brisbane focus or is just a refresh for some busy, competitive routes.

Readers, avgeeks, weigh in: what is Star Alliance up to in Brisbane?

The reason why there are only very few 3rd party lounges is that for the longest time, Australia only had one airline which belonged to OW. Virgin isn’t really in any alliance as it ties with Air NZ, SIA and Delta – a patchwork really. Therefore nearly 90% of the population are Qantas FF, and due to the market concentration, so many are OWS/OWE. 3rd party lounges may not be so economically viable. I estimate a full one third of Qantas aircraft are filled with OWE on the busy SYD-MEL route at peak hour.

I was lucky to be at the new Brisbane Air NZ lounge the day it opened last month 3/17 while changing flights from Christchurch to LAX on Virgin Australia.. I liked the view of the city skyline and all the glass and open views. And food. I was told that the new lounge across the hall was actually the old Air NZ lounge being rebranded. In my time in Sydney, Wellington, and the South Island NZ I didn’t really experience the nickel & dimimg phenomena of your earlier post, except for one airport motel with Internet coupons that allowed me… Read more »

Tim tams in the snack basket?!?!!! Add some tropical fruit and they’d have to drag me out of there. I’ve only been in the domestic terminal in BNE but the VA lounge there was pretty impressive.