So I’m going to tell you to stay and enjoy the resort. Not my usual recommendation!

I flew into Grenada on Saturday, trading rainy New York for spotless weather. Caribbean countries love their lengthy immigration forms and  procedures. Even the customs guy asked a few questions rather than waving me through. I guess backpackers are a relative rarity.

I had a little hiccup with the car. None of the major car rental agencies have airport offices. I booked with Avis and forgot to include flight info since I booked through BJ’s Travel and they do not have that field. A helpful taxi driver called Avis who said I would have to take a taxi into St. George. Nope. Instead I rented with local agency Y&R. Next up is the temporary driver license that in June went from US$12 to US$40, I believe topping Kuwait for most expensive I have paid. The Y&R rep drove me to the police station near the airport to get the license and then dropped me at the Radisson Grenada where her colleague met me with my car. Very nice of them to help me conserve time. Radisson Grenada is a good resort with all the usual facilities. Lots of pasty, stocky Brits on British Airways package tours. Modest beach. US$25 if your beach towel is lost or stolen. I usually stay at mom and pop guest houses, however the Radisson Friends & Family rate was about the same as any budget option on this moderately expensive island. I drove out through the capital, St. George and across the island along the windy Grand Etang Road. Heavy, fast-moving traffic and hairpin turns is nerve-wracking so for most I do not recommend renting a car. Either a taxi or the mad-cap local shuttles will do better and get you there faster. Not many road signs so navigate by sense and asking helpful locals.

I stopped at Annandale Falls and Grand Etang National Park. Modest natural attractions. Greneda has the typical outdoor activities, though many other islands are better. 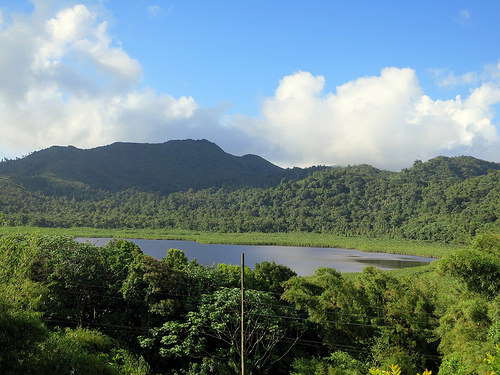 As it was a weekend, the attractions for the local spice industry, which produces huge amounts of nutmeg and others, were closed.

I reached the quiet leeward (eastern) coast for the abandoned Pearls Airport, which have a few crumbing Cuban planes from the US invasion in the 1980s. There were a few driving school cars on the airport. The shore is beautiful, enjoyed by cows and goats, though not attractive beaches for swimming. Grenville is the main town on the east. It was lively with weekend music and activities, much more welcoming than the sometimes ominous typical large Caribbean town. I saw a few tourists and would recommend it as a base for an atypical Grenada holiday.

I headed back to the Radisson for a quick swim as it became dark, then set out to the south for True Blue area by the University and Lance Aux Epines peninsula and found little going on. I was disappointed that several restaurants I visited like Red Crab had a token local dish like callalo soup but could not get my hands on an oil down.

Grenada feels to me like the average Joe of the Caribbean. It has all the elements, though none really stand out as superior. A good place to lay back and chill on the basic beach vacation.

What Should I Do in Cayman Islands and Turks & Caicos?

How to Maximize US Bank FlexPerks Flights - Rapid Travel Chai

Yes, the immigration is often infuriating. In Trinidad and Guyana they take themselves WAAAAAAAAY too seriously. Its the freaking Caribbean man, whats with all the forms. Flying tiny island to tiny island and I need to do full immigration? really?

Thanks for the Grenada post, I remember reading that at least in Antigua you can avoid their stupid drivers license fee by bringing and international drivers license. Is that not true?

Looking forward to more of these reports. The Caribbean is really difficult for non beach types like us.

@john – I had my bags searched for the first time since I can remember. By the time I left St Lucia I was chippy and lost it when the security, who took an interest in my cloth ankle brace several times in Antigua, at St Lucia made me remove the darn thing. I said, “You must be crazy.” She did not feel it was a complement.

Nine islands ins how many days? Hope the rest of the trip works out!

@John – so far the storm and LIAT have cost me 2 and no idea if they will fly today. FlyMontserrat is a piece of work about their own cancelations, “We don’t give refunds. It was an act of God.” And they are trying to collect a fee to move me to today which now won’t work either. Either my credit card trip cancellation insurance will cover or I will start a card dispute, even LIAT is crediting flights.

“It has all the elements, though none really stand out as superior. ”
In your opinion, where’s the crème de la crème of the Caribbean?

@ABC – Caribbean is still new for me, in May I went to Anguilla, St Maarten/St Martin, St Barth’s, Saba, St Kitts and Nevis. Add Dominica yesterday. So far Dominica is my favorite for the most friendly people and incredible, varied scenery, though it is difficult to reach and weak on beaches and resorts. Saba I also loved, similar feel, like Kong Island. For resorts, Anguilla is really expensive but superlative. St Maarten was a cross between a strip club and a frat party. St Martin is like a little French town. St Kitts has some nice plantation resorts on… Read more »

Thanks for sharing the review, loved the pics of the old airplanes. Are you visiting any other Caribbean Islands?

@Grant – this is the first of a quick planned 9-island trip that has already gone haywire due to the tropical storm in Antigua. Waiting since last night in Dominica for Antigua Airport to reopen.