HotelChatter WiFi Report 2012 gave its top honor to Kimpton Hotels.  Its ‘worst’ went to Westin for high charges and lobby wifi that is sometimes free though rarely works.

Japan knows how to manage long lines, this time elapsed video takes a bit to get rolling, then flies along.

NYT’s A Warning for Airbnb Travelers is a good read for users of the service, particularly hosts.

There is no “Chinese Cuisine” from Salon is a good primer on the many facets of food in China…and I am thrilled to be heading there this week after a long absence!

Plumbing the depths of cuisine, Japan Airlines this winter will offer KFC in economy on select flights to the US, see a photo of the set in the press release.

One Mile at a Time finds a New York hotel that is stealthily adding a resort fee-style ‘facilities charge.’ My rule on sneaky hotels or hotels with ridiculous fees is to avoid them at all costs.

The US State Department updated its Mexico Travel Warning, which includes a state-by-state analysis. I have been to 10 of the countries on the current list and conditions on the ground are often much better than the worst-case scenario style of the travel warnings. Nonetheless, they are useful and the state-by-state approach for Mexico is useful since conditions vary drastically. I have been to Mexico City and Yucatan several times in the past two years and never felt threatened; Mexico City is one of my favorite cities in the world.

From Taliban a decade ago now to capitalists, Afghanistan’s archeological treasures continue to be under assault.

Shermans Travel reports on a ‘hotel boom’ in Brazil in 2013. In 2012 rooms are tight at all price levels, and price-to-value is poor compared to most countries. I am skeptical these hotels will open in time or that there will be any real deals to be had. As one example, here was the constant scene at check-in at the São Paulo Park Inn Ibirapuera, during my recent stay. The lobby crowding was partly due to the convoluted, slow check-in processes I have found across Brazil. The going non-points rate at that Park Inn is about US$200 for a room with no coffee maker. I found similar situations in Salvador and Rio, and not many projects visibly in construction. Apartment owners with rooms to rent will make a bundle in the World Cup and Olympics. 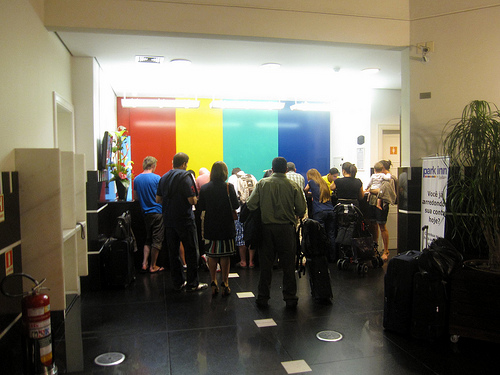 Mexico City is one of my favorite right now too. Oaxaca is second fav. Crap! I’m staying at this Park in on Thursday!