Bhopal is seared into memory for the 1984 Union Carbide disaster. The city has grown into a bustling regional hub and little-known tourist jewel of India. 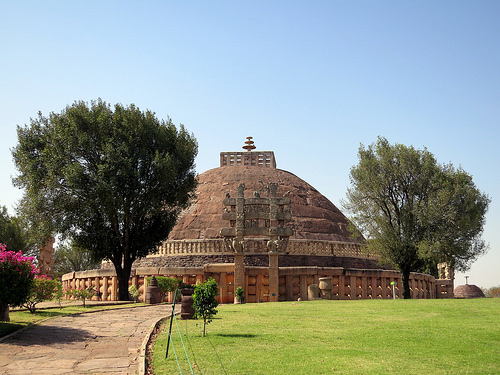 Bhopal boasts a lakeside setting, heavily Muslim-influenced old town, and two UNESCO World Heritage Sites on its outskirts. The airport is modern and comfortable for its few flights. Roads north of Bhopal, around the airport and Sanchi, are excellent and little-trafficked. South to Bhimbetka the roads become the typical India two-lane highway with heavy truck traffic. With little tourism there is little hassle of touts. There are two great, reasonably priced heritage hotels, Jehan Numa Palace and Noor-us-Sabah Palace, plus the usual chain hotels.

I was able to visit Bhopal as a day trip from New Delhi, taking an early flight out, chartering a taxi for a day for US$36, and flying back in the evening. The route I took was airport to Sanchi (30 minutes), Sanchi to Bhibetka (90 minutes), Bhimbetka to Bhopal city (45 minutes) and back to the airport (30 minutes). First stop, passing the Tropic of Cancer, was the UNESCO-listed Buddhist Monuments at Sanchi, active from 2nd century BC – 12th century AD. Incredible in the morning sun and none but the caretakers to share it. The toranas (ornamental gateways) are the pinnacle of Sanchi art, including the back-to-back lions that are the symbol of India. The Mesolithic period UNESCO-listed Rock Shelters of Bhimbetka are more historically significant than visually impressive. A worthy visit to the countryside that could be improved with better roads. I headed to Bhopal’s lakeside core for a refreshing lunch at the Jehan Numan Palace, a hot spot for business lunches and ladies of leisure. The US$15 indulgence was worth the classic, air conditioned setting out of the midday sun. Dinner under the massive courtyard mango tree would be sumptuous. Rejuvenated I plunged into the old town warren for the Sambhavna Trust Clinic that cares for victims of the Bhopal Disaster through eco-friendly blends of biomedical and traditional Indian treatments. They had just closed for the day however the director kindly gave me a tour of the clinic. I made a modest in-person donation and those interested to support can donate here. Behind the clinic, obscured in the booming neighborhood, is the abandoned Union Carbide facility. The old town, with its gigantic pink mosque and legacy of female rulers deserves more exploration than I could muster in the heat and long day.

Bhopal is off the tourist circuit yet boasts the elements of India at its best. Consider it.