Virgin Atlantic dares to be different where competitors are becoming indistinguishable from another.

Last week I flew Virgin Atlantic’s Upper Class on their old A340 and new A330 to India and back on a business trip.

My virgin Virgin experience I loved the novelty of the experience, a fashionable mix of trendiness and old-world cruise liner formality. 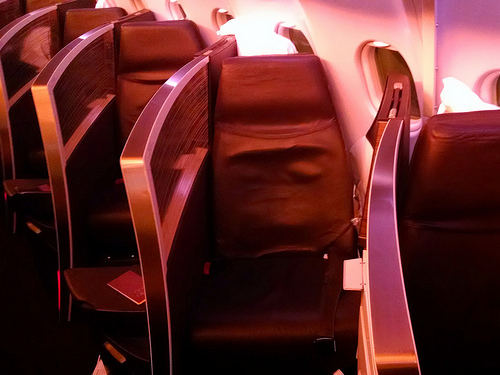 Breakfast and a good AVOD On the return, exhausted from work, the sheen was off a bit and many of the things that I enjoyed that first time became little annoyances: Lots of pluses, kudos for a cool experience, plus some minuses. What are we left with?

Absolutely go for it at least once if you have the chance. Virgin Atlantic is dedicated to being an experience to remember and they deliver better than any competitor I have tried. Great to set the mood for that vacation across the Pond.

If you want a basic, no drama, get a quick meal, eat and rest without the flourish experience, you might prefer more staid options.

For connecting passengers, weigh the value of the Clubhouse versus all the hassle of London. As an experienced Indian women ahead of me at boarding put in when requesting the gate agent track her bag, “My luggage never makes it out of London.”

@FACTS – good to hear, since going revenue-based I have greatly reduced my Delta flying.

@RTC, we’ll be flying Upper Class to LHR, arriving 6:45 a.m. and then catching a British Airways flight to CDG. We weren’t planning on checking any luggage. Carry on only. Realistically how much time do you think we need for the connection? Any tips would be very much appreciated!

@Liz – I have bit tried switching terminals at LHR, everything at LHR is unpredictable but predictably slow, without luggage and with boarding passes in hand might cut it as low as 90 minutes, though 120 is a better play.

Thanks for the review! It makes me want to try Upper Class at least once.

Bacon sandwiches are always just bacon and bread, in England. Well, butter is usually on the bread, and you should normally add “brown sauce” (hopefully HP brand) or ketchup (known as tomato sauce, tomato ketchup, or even “red sauce”). I’m american, but I have grown to love them. I usually prefer them the way I make them at home, on a crustier slice of white bread, rather than the wonder bread type they usually put them on on airplanes. We flew Virgin Atlantic in coach a couple of years ago, and it is hands down the best coach flight I’ve… Read more »

@Jamie – I have flown Virgin Australia in coach, not yet Virgin Atlantic. I really enjoyed the experience and I think $100 sounds about right for a premium.

RTC, I loved this post! Your take on being the Dr Jekyll & Mr Hyde (or perhaps Plucky & Devil’s advocate) reviewer of VS is just bloody fantastic! 😉 I have never flown Virgin Atlantic but will be doing so later this year and am now looking forward to it.