Hundreds of thousands of Club Carlson points that many of us have can fly away with an errant profile selection.

I was researching Club Carlson and came across a FlyerTalk thread where toomanybooks read the fine print on Club Carlson >  My Profile – Earning Preferences:

Important Information: When you select Miles as your earning preference your entire balance of Gold Points and all future Gold Points earned will automatically convert to Miles with the airline you have selected in 10,000 point increments. Miles can not be converted back to Gold Points. All miles with this auto conversion option will be redeemed at an 10:1 ratio.

In fairness to Club Carlson, the warning is right there for all to see, however we are all guilty at times of skipping over the important details. Since many hotel programs have the option to earn airline miles, which applies only to future earnings, I can imagine people have gotten burned by this.

The closest comparison may be Le Club Accorhotels that by default allows members to bank points for later use or conversion, but also has an automatic conversion option that converts all existing points. Those of us, like me, that have automatic conversion to Iberia Avios probably overlooked the multiple devaluations last year. See Loyalty Lobby for the current airline conversions, which now favor several Asian airlines. 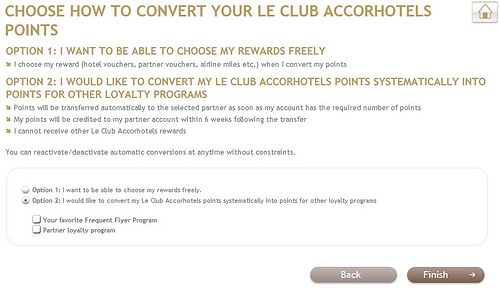 Club Carlson points are my most valued hotel points since I combine with their credit cards to maximize their award last night free benefit for 2-night stays. Club Carlson has a lot of quality properties in parts of the world, particularly Europe, where alternate hotels are often expensive and chain hotels available for point redemption can be few or outrageously priced. The people complaining about hotels in Sochi probably wish they had the points to redeem for the Radisson Blu Resort & Congress Center, Sochi, see my tour of the hotel in October.

[…] and notes from around the interweb: Be careful — if you select miles as your earning option with Club Carlson, they’ll convert your entire poin… Turkey is going to eliminate visa on arrival for tourism and trade and begin requiring e-visa in […]

I was caught by this one a few years ago — was staying at a Park Inn to complete a promo and all of my Club Carlson points turned into US Airways miles. Made sure to have points, rather than miles, selected from then on.