The open road beckons in Australia and speed cameras are there to capture a keepsake.

Last fall I traveled to Australia and a couple months later received a State of Victoria Traffic Infringement Notice in the mail. I was resigned to paying the AUD 176 (USD 185) until Darin of  The Next Journey, helpfully shared his Internal Review experience and even got Hertz to waive the AUD 35 processing fee.

The State of Victoria permits application for an Official Warning:

You can generally apply for an official warning if you:

An official warning will not be given for red light, mobile phone, seatbelt or generally any serious road safety offence, however consideration may be given where a proven emergency situation can be shown.

Following Darin’s instructions, I prepared a package with:

I mailed to the “Officer in Charge.” A few weeks later I received an updated notice with a further penalty for lateness. I called and found that the items had crossed in the mail, that my materials had been received and the Infringement was on hold pending review. About six weeks after that I received a Infringement Withdrawal Notice and Official Warning, with the a stipulation that I am “… ineligible for another warning for a similar offence for a minimum period of two years from the date of this offence.” 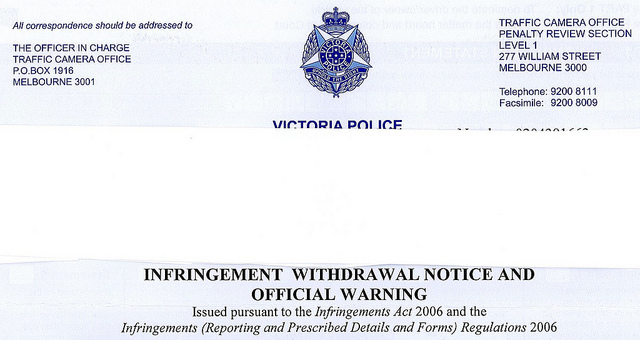 Each state of Australia has its own rules, checking some it is not clear that all allow such a petition or at least do not provide details online. The Australian government portal maintains a list of each state’s infringement payment portal where details can be found.

Dear RapidTravelChai
I was in Melbourne few weeks back and just received a fine for a speeding offence under 10km/h. Glad I found this article of yours, really wish it could be waived. Would you mind sharing your letter of appeal with me? Thanks in advance, much appreciated!

Dear Rapid Travel Chai.
Great that you got yours waived. It was my first time in Australia, driving in Melbourne & I just received 3 fines for exceeding under 10km/h. Do you mind sharing your appeal letter as a reference to write in to appeal? Many thanks in advance.

I got 2 speeding tickets during my trip. Would you mind sharing me your appeal letter to me?

Please and thanks in advance!

Dear Rapid Travel Chai.
Do you mind sharing your appeal letter as a reference for me to write in to appeal? I too have just received 3 speeding fine from Victoria state. I was traveling as a tourist. The speed exceeded are below 10km. Hope they will wavive it. Praying hard 🙁
Many thanks in advance mate!

Hi there,
I received the similar traffic infringement mail, hope you can forward me a copy of your letter.

Thanks in advance.
Maneesh

I also obtained a speeding ticket for about $300. It was my first time receiving one. Do you mind sending me a copy of your letter for reference? Thank you very much.

I recently got a speeding tickets during my trip to Melbourne. I was going at 105km/h when the speed limit was 100km/h. Could you kindly share with me your appeal letter? Thank you in advance.

I recently got a speeding tickets during my trip to Melbourne. Could you kindly share with me your appeal letter? Thank you in advance.

I got 2 speeding tickets during my trip. Would you mind to share me your appeal letter to me as well? Please and thanks!

I received a traffic infringement notice recently. Unfortunately I was not even having idea I was exceeding the speed limit, and this was the first time I have received this notice.

Can you please forward a copy of the letter. I shall try to get the penalty waived off or lower the amount. Thanks.

I received the similar traffic infringement, hope you can forward me a copy of your letter. Thx.

I was at melbourne about a month ago, and that was when I got a fine of $3k. I was driving at 111km/h with the permitted speed limit is 100km/h. I honestly didn’t rmb that I was speeding and it wasn’t my intention. Issit possible for me to ask for a waive or sth? It my first time getting any fine!

Could you pls forward me your copy? Thanks a lot!!!
Baohui

@Baohui – yikes! Just emailed to you.

I was at Melbourne about a month ago and was caught speeding at 111km/h in a permitted speed of 100km/h. The fine is about $3k which I felt is outgreous. It my first time getting any transport fine! Issit possible for me to get a waiver or lower the amount of the fine? Pls forward me a copy of your letter! Thanks

Thanks for sharing your experience so people know what options we have ! I am in a similar situation as what you’ve experienced and came across your website. I was driving at a speed of 105km/h in a permitted speed of 100km/h.

Please share how you manage to get a first violator’s warning and the hertz’s fees to be waived.

@Bernard – I did not chase Hertz to get the fees waived, but others have.

I am so glad I found a legit blog on what to do about speeding tickets in Australia!

If I can also request copy of your letter as well?

my daughter just received notice from the rental company to be expecting a fine.

can you please send me a copy of your letter as well, she was going 107 in 100 zone and the fine is $3000 according to the notice she was sent, we are all very stressed and concerned and just have to wait until she actually receives the one in her name.

we need to try and be ready when it does arrive as we don’t want to miss any deadlines.

appreciate any and all help!

@pam – sent, best of luck, that is really distressing.

Currently in the same situation where I’ve been caught going at 116 in a 110 and have been searching for advice on how to move forward with my application for internal review. I was hoping you’d be able to explain a bit more about what you wrote in your cover letter when you explained the outline of the circumstance (were you giving a reason for speeding, or suggesting the circumstances meant it was still safe, or just admitting the infraction?). Sorry about pestering you, but any help you have would be greatly appreciated!

@David – I will send you the letter I wrote.

I’m a tourist and i was driving from Richmond toHobart in Tasmania and was too focused on where I was going and at the last minute noticed a speed limit of 70km/h… by the time I notice, I guess I was travelling at about an additional of 10km/h at the most…

I’m not sure if I was caught for speeding 🙁

is there any way to know before I leave tasmania on 6th?

@Joyce – sorry, I don’t think so, it seems to be a long-ish process of notification of the police to the rental agency and on to you. For what it’s worth, my experience in Tasmania was, I confess, driving aggressively as well and had no issues nor found many reports online of the cameras being used aggressively like Victoria. Either way, please enjoy your vacation in a great city!

Actually the 10km/h leeway is a standard allowance to stop the courts being clogged by people appealing the accuracy of the equipment. And as you note, you can’t do it all the time and it would not have been as easy if you were in a zone with limitations for schools or similar.

Well done! I know you tried to emulate our rule-following habits.

@KB – I found that I was in the chute of 3 cameras around Geelong that have snared plenty of tourists with 3 quick successive infringements!

How can Rapid Travel Chai not be traveling rapidly?

This is actually useful to know as a resident. Cheers.

How about drive safely and follow the law before you kill other people, asshole!

@Morgan Freedmen – you will see from my earlier post that I drove roughly a week in Tasmania, Victoria and Queensland with only this violation for 8 km/h over the speed limit. State of Victoria understands that it is easy to go a little over by accident so allows this warning for first-time violators who are no more than 10 km/h over the limit, which I feel is reasonable and not endangering cars on similarly moving expressway traffic.

Wow nice. I got one in New Zealand by an officer but didn’t bother protesting it as it was only 65NZD, which at the time was about 40 dollars.