The past year while I’ve been stuck on 191 of 193 UN countries I’ve been working on completing my US 50 states and starting up on US national parks.

With recent trips to New Mexico, Arizona, and Montana, I’m up to 44 states.

The parks in the lower 48 are all rather accessible if you don’t mind some long drives.

Alaska and the islands take a bit more. I regret when driving around American Samoa that I didn’t turn left up the hill to visit the national park there.

Alaska has 8 national parks out of a total 24 National Park Service units (see Everything Everywhere’s Alaska National Parks Guide for details on them all).

At first blush I thought visiting them would take charter flights or cruises. Is that true? 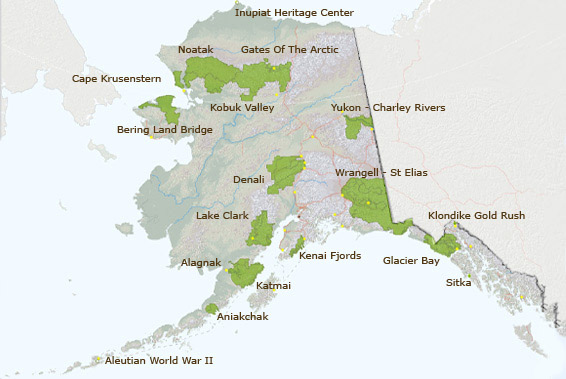 I am narrowly defining national parks on points as airline miles for flight award tickets that reach the park (within a reasonable shuttle or rental car drive).

For this post, I am not considering hotel points for accommodation or pay with points programs for cash rates. I’ll explore those when I map out visits.  Most important to me is can I get to the park on an award flight.

I frown on posts that tout theoretical awards. By that I mean awards that are on an award chart that someone writes up without testing if they actually are bookable or ever have award space.

So, full disclosure, this post is provisional and I have not yet tested booking. The good news is that Alaska AIrlines Mileage Plan parters PenAir and Ravn Alaska are bookable online and I see no reason to believe they can’t be ticketed.

Examples: for Katmai National Park, you can see PenAir to King Salmon (AKN):

What Points Do You Need to Visit Alaska’s National Parks?

Alaska Airlines is the main airline serving destinations in Alaska, plus it partners with PenAir and Ravn. You’ll need Alaska Airlines Mileage Plan miles to book tickets on these partners.

Tip: Alaska Airlines allows stopovers on one-way awards, though this usually does not allow backtracking through the same airport. It is feasible to stop in Anchorage to visit parks there, and continue onward to your destination. Stringing together multiple parks on one ticket will be an exercise in trial and error.

Other US airlines are mainly limited to service to Juneau (JNU), Anchorage (ANC), and Fairbanks (FAI). These service can be seasonal, such as Delta’s Seattle-Juneau flight.

Seasonality is important – flights may be limitd to certain parts of the year. Make sure there is a scheduled flight before trying to find award seats.

Alaska Airlines seasonal (summer) service from Juneau to Gustavus (GST), 10 miles by road from the park headquarters at Bartlett Cove.

This park is a popular cruise ship stop.

To fly closer, Ravn flies to Valdez (VDZ) and there is one local rental car agency.

Ravn has some charter services to a string of airports to the north of the park that do not appear to be bookable.

Start your research at the Yakutat Ranger District for what’s feasible.

126 miles from Achorage, outside Seward.

West of the park is Kanai (ENA), serviced by Ravn. With several rental car agencies you can consider a one-way rental from Anchorage.

This is the first one we are out of luck. No roads in. You’ll need to fly via one of the air taxis from numerous airports.

Gates of the Arctic National Park:

With a name like Gates of the Arctic, you can expect to be a tough one.

Air taxis, or hike in from the Dalton Highway (AK-11), which the excellent Your Guide to the National Parks notes, “…comes within 5 miles of its [the park’s] eastern boundary. Economically minded hikers can begin on foot from Dalton Highway (river crossing required).”

Ravn has charters to Anaktuvuk Pass which is a walk-in point as well. I don’t think these are bookably by miles, but worth a call to Alaska Airlines if you are so motivated.

Ravn also has chaters to Bettles, which has air taxis to both Gates of the Arctic and Kobuk Valley.

Air taxis again, though you can get to the jumping off point for them by Alaska or Ravn to Kotzebue (OTZ).

Starting out, I expected at best four of eight parks to be reachable on points.

With three drivable from Anchorage, one more served by Alaska, and another served by PenAir, you’ve got five of Alaska’s National Parks that you can fly to on points. The savings on flight cost can go to what no doubt are pricey activites in these parks.

Readers, what are your thoughts, expertise, and experiences visiting Alaska’s national parks?

Awesome. I’ve been inspired by a few hikers I follow who have crossed the Brooks range and definitely have that on my list of trips (ideally a kayak + hiking crossing). Not a national park but people start at the Canadian border in the Arctic National Wildlife Refuge. You can get a flight to Fort Yukon which is maybe a hub? to get to something called Joe Creek via charter. It looks like Chalkyitsik is closer to where people start but it has a population of like 50 vs 500 so doubtful it has as many flights, but who knows.… Read more »

@dizzy – giving me ideas right back. And I won the Denali Road Lottery this year on my first try, so heading back in September.

[…] Stefan from Rapid Travel Chai is more of a completist than I will ever be. While he’s stuck at visiting 191 of the 193 UN countries, he’s also trying to visit all 50 states and the U.S. National Parks as well. Here’s his guide on how to use points to visit all 8 of the parks in Alaska. […]

Interesting post. Yes, some of these parks are frustrating!
If you ever do go back to American Samoa, consider visiting the park units on the other islands. They are amazing vs the one on Tutuila is just ho-hum in comparison.

I’ve been to Denali and Kenai Fjords, both of which are easy, as you mentioned. Spent 3 nights summer 2017 camping in Glacier Bay. Having done it “the hard way”, I wouldn’t bother again. Honestly the cruise ship drive-by is probably just as rewarding; there really is a small area of highlights that are impressive and I found the hikes, wildlife, and scenery to be more enjoyable in other parts of southeast Alaska e.g. the islands off Sitka. (FWIW, I’d argue that dipping in from Yakutat might give you Glacier Bay on a technicality, but would miss the highlights and… Read more »

@Becky – thank you for all the tips and confirms what I am not likely to take these up till 2020 when I can devote time to more substantive visits. I’ve not yet looked into cruises, though maybe a late season one out of Seattle (where I live) if the price is right last minute I can hop on.