When I decided to start flying United as my secondary airline, I thought I would use Same-Day Change a lot. United allows SDC on international fights which others do not. They have a fare class requirement that Delta copied, though are better than Delta at releasing space ahead of departure. It is ok to change connecting airports. See Travel Codex for more on United’s SDC.

In practice, I have hardly used SDC as a New York-based traveler. The issue is that United does not allow SDC among co-terminals. Delta Diamonds have an unpublished benefit that they can hop among LGA, JFK and EWR.

With multiple airports, the price differences are often stark. United typically prices LGA (connecting) flights much cheaper than EWR. Delta does the reverse.

A Minneapolis-NY flight I am looking at this morning illustrates: 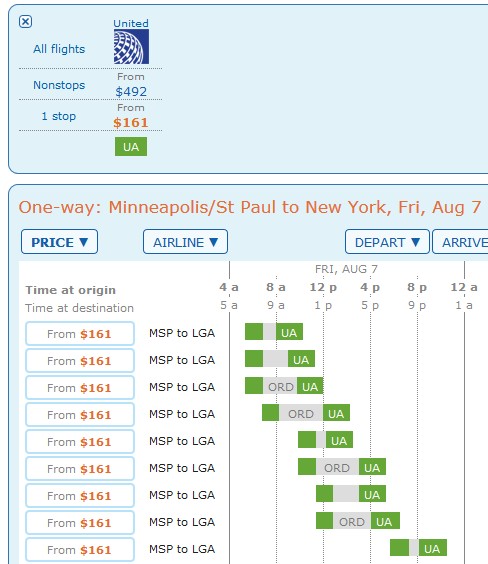 Naturally I would like to buy the cheapest ticket at $160 and have a shot at SDC to the $492 nonstop. No dice.

How does the United’s exit from JFK, moving it ps transcon service to Newark fit in?

My flight back from China next week is a typical case. Shanghai-Newark nonstop priced thousands more than anything with connections. The NY-Shanghai market is only served nonstop by China Eastern and United, so that is common.

I could most cheaply connect through Los Angeles or San Francisco on this day. I then had two options:

I went with the JFK connection.

Come October 25 everything will be through Newark, fares may or may not go through the roof as the only quality transcon product out of EWR, however SDC may get useful.