Coptic Christians in Libya are among the latest victims of monsters pledging allegiance to the creed of ISIS, the acronym an insult to the idea of the homonymous ancient Egyptian goddess. The Isis of the ancients:

Isis was worshipped as the ideal mother and wife as well as the patroness of nature and magic. She was the friend of slaves, sinners, artisans and the downtrodden, but she also listened to the prayers of the wealthy, maidens, aristocrats and rulers. (Source: Wikipedia)

I visited the famed Coptic Red and White Monasteries of Sohag, Egypt in January. The Red Monastery is still in multi-year restoration under the auspices of The American Research Center in Egypt and so I could not gain entry to the chapel reputed to rival the Hagia Sophia. The caretaker showed me pictures of the interior on a flip calendar. See this 360-degree panorama. 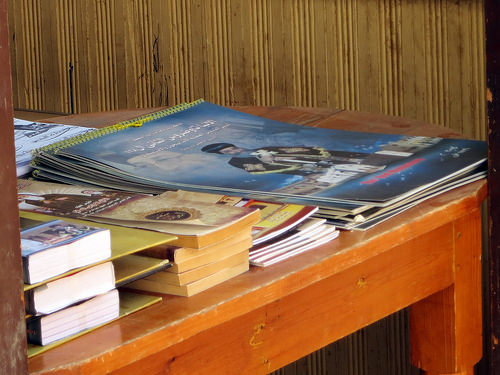 Both on the holiday weekend I visited were filled with tour buses of pilgrims, parents leading children to take off their shoes to enter.

RIP to those sadistically slaughtered.