“Yes, getting back from Mexico City requires a 36-hour layover in Cancun due to flight schedules.” The Rapid Traveler was selling, but Mrs. was not buying.

5:45 am alarm at the Courtyard near Cancun Airport, on the road 6:10, a quick turnoff from the Cancun-Tulum road to the 180D toll road (cuota) to Chichen Itza. Costing nearly $30 in tolls the road was deserted. In retrospect it may not have been more than half an hour faster than the free (libre) 180 old highway. The disadvantage of the local highways is frequent, vicious speed bumps in villages, but the villages are few on that route.

Covering the 200-km in a dash, The Rapid Traveler rolled in for the 8:00 am opening, paying the first of many inflated parking and ticket prices that even the most current guidebook is well behind by as much as 50%. Like a casino they helpfully point to an on-site ATM for tourists expecting the old price and short on cash. Chichen Itza was the  most expensive of the day with MXN 22 for parking and MXN 166 for the two required tickets, but that is $14 well spent. 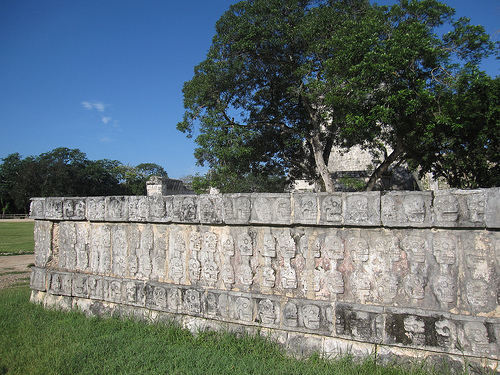 The centerpiece is, El Castillo, the main pyramid, but it is too perfectly restored. The cavernous ball court is the most impressive, though closed for repairs, hopefully not smoothing over all the cracks. It is awe-inspiring to think how the players ever got the ball so high into the ring, and without the use of hands. The surrounding, crumbling ruins have the most character. By 9 am the first tour buses were arriving and the vendors out in force, so it was time depart. Chichen Itza lives up to the hype, but the experience would be much diminished if competing with tourist hordes. Get there at 8. Backtracking to Valladolid and up to Ek’ Balam, about 45 minutes away, with the promise of lonely ruins with the cool name of Black Jaguar, the site failed to meet expectations. The large pyramid is impressive, and the unexcavated backside is interesting, but there are few other buildings to see. Since it is just a short detour from the road back to Cancun, those with their own transport can combine it lunch in Valladolid. Ahead in the afternoon: three more ruins. Obsessive, yes, but each has its own lure. The question is which should non-crazy people fit into their Yucatan holiday?

RTC, I just linked a Mexico and Florida business trip together. Did Tulum, Coba, night in Valladolid, Chichen Itza, Ek Balam, and afternoon at Cancun’s Dolphin Beach. An awesome weekend with the wife. Thanks for the inspiration!

@Charles – that is so cool, did more than I could slip in one mine!